A piece dealing with the nature of museum collections and questions of authenticity, are thoroughly in line with the past artworks. By combining several collections into one object, a fantastic journey is entered; a leap of faith becomes a contract of exploration and inevitably a disposable hypothesis.

In continuation and as a basis for the new work, Beckett draws inspiration from a piece of history he recently stumbled upon: The passing of the last Christian Crusades eastwards resulted in the stranding of a small party of its army in the remote and rugged landscape of the Caucasus Mountains. It has been noted by early ethnographers, that the Khevsur people of Georgia are indeed direct descendants of these original Crusaders. With customs and artefacts of Christian residue handed down through generations, an obscure yet tangible history is preserved by its geographic isolation.

As a keen starting point Becket exploits a very slight similarity between Khevsur architecture and that of generic zoo environments. A set of faux-utensils has been developed to fit such a landscape, informing methods of survival and perhaps more menial chores, all in a single set of hybrid objects.  The Khevsur themselves become secondary to this bloated fantasy, more a parallel ancestor of a new imaginary people, revealing a potential culture, which is, as is so often the case, enacted through tertiary objects.

The work in Rome was quite a blast to make. I guess you read the press-release? It is intended as quite a flight into the fantastical. The small fragment of history being the cut-off crusaders, having mixed with local Georgians in relative geographic isolation was the inspiration for the piece. I found it quite a mysterious event with all kinds of implications for a material tradition relating to this ethnicity and survival. The weapons are a projection relating to this identity, and quite joke in the end. They are made from three different collections, much like the museum ‘stacks’ in the Hilversum museum which I sent to you. The stems are ski-poles, the knives are mostly Spanish bayonets, and the spoons are a mixture of Finnish and Dutch sauna spoons. They are wrapped with various natural and synthetic strings, then spray painted and rubbed like hell to produce the patina. The end result are the stab-stirring devices which make no sense. Some dysfunctional artefacts for an imagined and unresolved existence. With age there comes authenticity, but in the end the objects remain pretty useless. 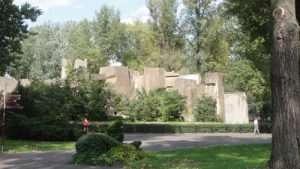 The terrains are potential hunting grounds, without residents and baron. As attachment are three pictures, the first is a famous compound fortress/ housing of the Khevsur, the second is an area of the Warsaw zoo, and the third is an empty bear terrain of the same zoo. The connection was the relationship of the organic Khevsur architecture to that of the vertical concrete. I took a bit of license in the connection and used the otherwise unrelated bear habitat anew for the Khevsur, – less a dwelling and more a ravine. Something like this!!!

Works of James Beckett with constant interjections by Frank Key

The publication accompanying the Belgian Pavilion at the next Venice Biennale, Personne et les autres borrow its title from a lost play by André Frankin, a Belgian art critic affiliated with the Lettrist and Situationist Internationals.